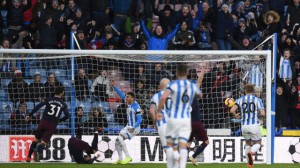 Liverpool returned to the top of the Premier League table with a convincing win over Bournemouth at Anfield.
Goals from Sadio Mane, Georginio Wijnaldum and Mohamed Salah gave Jurgen Klopp’s side a 3-0 victory to take the three points above Manchester City, who host Chelsea at Etihad Stadium today.

Two goals from Paul Pogba and one from Anthony Martial gave Manchester United a 3-0 win at struggling Fulham and extended their unbeaten run since Ole Gunnar Solskjaer took over to 11 games.

That was Solskjaer’s 10th win since replacing Jose Mourinho and took United above Chelsea and into fourth.

Arsenal gained a 2-1 win over bottom-of-the-table Huddersfield Town with the Gunners’ goals coming from Alex Iwobi and Alexandre Lacazette. The Terriers’ late consolation came via a Sead Kolasinac own goal.

Mark Noble’s penalty put West Ham ahead at Crystal Palace before an equaliser from Wilfried Zaha made it 1-1.

Andre Gray scored the only goal as Watford beat Everton 1-0, a match that saw an unhappy return to Vicarage Road for Toffees boss Marco Silva, who was the Hornets manager at the start of last season.

Cardiff City moved out of the relegation zone with a dramatic 2-1 win at Southampton. Sol Bamba put them ahead, Jack Stephens scored an injury-time equaliser but Kenneth Zohore scored an even later winner.